Frozen’s Elsa is poised on the ice, waiting for her instructions.

Our student, Samantha, creates a list of commands. If she organizes the list correctly, Elsa will “skate” a snowflake on the ice.

When done, Samantha will click “Run” and Elsa will gracefully skate the pattern Samantha commanded on the screen ice. If the pattern is correct, Samantha will move to the next level and continue the game by writing more challenging instructions. 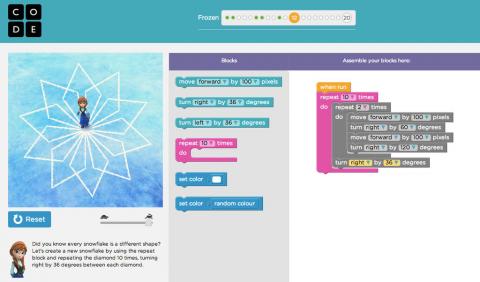 Yes, this is a game. But what Samantha and many other students throughout Simi’s schools, and the world, are doing is coding. Coding is computer programming, where specific commands are used to tell the computer to carry out actions. Last week, in an ongoing, international effort to promote teaching kids how to code, many of Simi’s schools participated in the Hour of Code.

To help support the effort to teach coding, some of the biggest names in tech, retail and entertainment joined together to create games, classroom apps, tutorials and curriculum that teachers could use to expose their students to coding. During the week of Dec. 8-14, the official Hour of Code organization offered live web chats with celebrities such as Ashton Kutcher and Jessica Alba to 100 classroom winners. Major corporate sponsors included Amazon, Apple, Microsoft, Best Buy, Disney, Google and The Boys & Girls Clubs of America.

From kindergarten through high school, students jumped into these programs–alone or in pairs–to write code and get to the next level. And at many schools, parents were welcomed participants in after-school coding parties.

John Brinkman is a computer programmer. He’s also the father of Theodore, a second grader at Wood Ranch Elementary School.

“This is real good,” Brinkman said. “It’s teaching them sequential skills. This is actually how it happens in real life. Well, not with Angry Birds, but otherwise it is. Soon, before they know it, they’re tricked into doing their own video game.”

This week, following the completion of the Hour of Code week-long event, the website had 77,441 Hour of Code events registered. In all, it’s estimated that 15 million students learned an hour of code last week! The games and tutorials weren’t just used on computers. Smart phones, tablets, iPads and other devices were all used with the coding apps.

Here in Simi, the Hour of Code was a voluntary program. Dustin Ellis, Teacher on Special Assignment (TOSA) in charge of technology, said the turn out was much better than last year with most schools participating in some way.

“Hopefully they will continue on with coding,” Ellis said. “There are several teachers that are taking this on and continuing with it.”

One example is Deborah Ibbott, a fourth grade teacher at White Oak Elementary. Ibbott has made coding a part of her daily instruction with her students. One hour each day is spent on coding to help teach the students computer science. But coding also requires students to know geometry, math, language skills and more, making coding a great Common Core choice for classroom instruction.

For more information on coding, go to hourofcode.com. Disney’s Frozen, the Angry Birds and other code games can be found at studio.code.org. The Walt Disney Co. has more information about its involvement in Hour of Code HERE. A quick search in the iTunes store for “Coding” will also glean a ton of apps for children and adults wanting to learn basic coding.

One thought on “Hour of Code: Raising the Bar on 21st Century Skills”