In Simi Valley this year alone about 50 teens will try to take their own life.

That’s a statistic that no one wants to experience in reality.

We know that our teens today face many formidable challenges and even the most stable family can find itself with a child who suffers so much they consider the ultimate action–taking their own life.

That’s why the Simi Valley Police Department and Student Support Services in the Simi Valley Unified School District have organized Suicide Prevention assemblies for all middle and high schools in the District.

The assemblies began last month at Valley View Middle School and continued this week at Hillside Middle School. Next week is Sinaloa Middle School’s turn and all of the high schools will have their assemblies scheduled after the Winter Break. 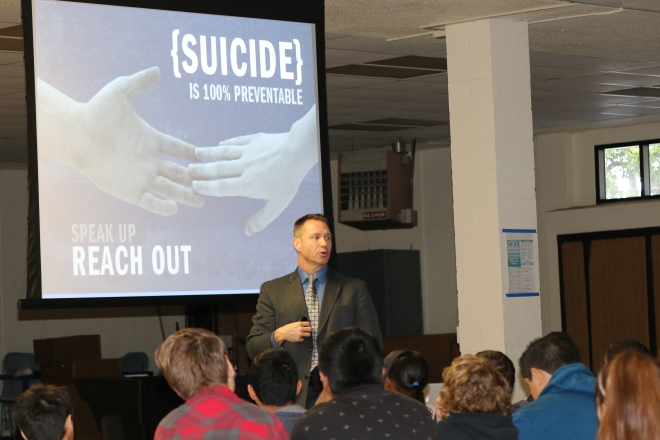 Det. Dan Swanson of the SVPD investigates homicides. At Hillside on Thursday, Swanson delivered the same powerful message of turning despair into hope as class after class came to the cafeteria to hear his presentation.

“Let’s be blunt,” he told Chris Kuske’s and Matt Kingsbury’s 8th graders. “If you kill yourself, you just die. The consequence is that you will leave a blast radius in your family and friends and community and you won’t even know.”

The fix, he said, it to talk about your problems, even those too big to see an end to.

“Nobody ever fixes a problem in a secret society,” he said.

His message was aimed at kids who might have or might be considering suicide, as well as their friends who may know about someone who is thinking about suicide, or who show any of the warning signs.

When it came to the potential for someone to take their own life, he urged friends to not worry about breaking confidences or making someone mad. The bigger issue is to get help, and fast.

“Better a mad friend than a dead friend,” he said. “Don’t ever worry about giving up a friendship; worry about saving a life. Life comes first.”

Everyone has value, Swanson said, no matter what they’ve heard. People can be mean and life is difficult, but these are not excuses to give up trying, especially when it comes to getting help.

“Getting help is brave,” he said.

Swanson also talked about self-harming–cutting and other behaviors. He showed graphic pictures of someone’s arm and another person’s thigh that were both permanently scarred by cutting.

“It fixes absolutely nothing,” he said. “Remember that you control your pain. Transferring it to another part of your body is not helping it.”

Students were encouraged to stay behind after each session and talk with a counselor or Swanson if they wished. Principal Jerry Block also had counselors in the school’s library during lunch on the days of the presentation so that students who were hesitant to approach counselors in front of their friends would have a more private option.

Block said about five students came the first day. And each session saw a handful of students stay behind to speak to someone.

Many of the kids were crying as they listened to Swanson speak. Some held hands with friends. All seemed to take the message seriously.

Swanson provided each student with a card to keep in a pocket or wallet. On it were many area resources that any student can reach out to get help, whether they know someone who us suffering or if they are suffering themselves.

“There are people out there who care,” he said. “Don’t you dare give up on yourself!”

One thought on “Giving Up Is Not An Option: Program Confronts Suicide With Students”