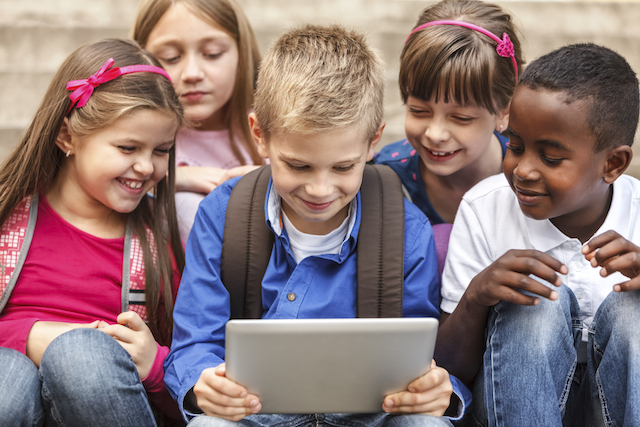 Over the next few weeks, about 600 parents and guardians will return to school to help launch the Simi Valley Unified School District’s iPad Pilot Program, which is part of the bigger SVUSD Technology Plan that has brought major changes to Simi’s classrooms during the last two years.

In its second year, the iPads only spent about six weeks in the classrooms last school year, said Reina Bejerano, program coordinator for technology at the District. But that was enough to get the teachers, parents and kids involved with the program excited about what they were doing.

“I was happy to see how excited the kids were, and how engaged and excited the parents were,” she said. “It created a level of excitement in the classroom you don’t usually see.”

There are 23 teachers participating in the pilot program that covers 16 elementary schools and Hillside Middle School. The teachers span from kindergarten to sixth grade and two of the teachers have Special Education classes. Each teacher’s class will receive an Apple TV, iPads for each student and supporting equipment (power strips, chargers, etc…).

In turn, the teachers have been given guidance and suggestions for how to use the iPads, but no mandates. Bejerano said that the point of the pilot is to see how these devices will enhance learning and how easy it is for the teachers–many of whom had no prior iPad experience–to adapt to them.

“Each teacher and each principal set their own visions and goals that were particular to their schools about what they wanted to accomplish with the iPads,” she said.

One teacher set three goals for the iPads’ use in her classroom. They would be used as learning tools (through apps and the Internet); they would help instill independent practices to increase knowledge; and they would serve as a means to differentiate instruction, meaning that lessons and practice work could be tailored to each child’s needs and abilities.

There are many kinds of apps available through the iPad that help supplement classroom experiences, including some already familiar to the teachers and students, like EveryDay Math and Accelerated Reader. Others apps help with classroom management, test-taking, instant quizzes and presentations. Then there are the websites, like Khan Academy, which provides bite-sized video tutorials on specific standards. (How to multiply fractions is one example.)

Throughout the year, Bejerano will regularly visit classrooms to see how the iPads are used and also to offer additional monthly training to the teachers.

So why are the parents coming to school? The way Apple sets up the iPads, each student must have an account with Apple exclusive to the school (existing accounts won’t work for this). To do this, Bejerano and her team are hosting tech nights at each school to guide parents through the set-up process. This also gives parents a chance to ask any questions about the iPads and their use.

Last year’s parents were at first skeptical about the iPads and had many questions about expectations and access. But, at the end of the school year, every iPad was returned in good working order and parents overwhelmingly told the teachers the iPads helped their children learn better.

Internet access with the iPads is only through WiFi. Every Simi campus received improved WiFi over the last year and most of the iPads will remain in the classrooms. Bejerano said that the teachers and principals have been given the option of having students take the devices home with them. Most seemed hesitant to do this, but Bejerano believes that as teachers and students become more adept at using the devices, more will go home with the students.

What parents do need to understand about the iPads is that when they are used at school, the District’s Internet filters are in place and students are restricted from accessing questionable Internet sites and content. But, when the iPads or any other Internet accessing device are home, those restrictions are no longer in place. Students receive training in digital citizenship at the start of the school year, but parents must be vigilant about how their children are using the Internet, Bejerano said.

It’s not just iPads that are being piloted. ChromeBooks are also in use at every grade level throughout Simi’s schools. But, Bejerano said, the ChromeBooks were simpler to set up and use and they’re also kept solely in the classroom.

At the end of the school year, Bejerano and others involved in the District’s technology programs, will evaluate the pilot programs and use the information gleaned from the effort to help guide the District into the next phase of technology expansion.

3 thoughts on “Parents Get Set Up for Piloting iPads”